It seems Coke/Diet Coke reigns! Here are the results of our last poll:

I shared with you a few weeks back about my kids' love of Coca-Cola World and our favorite Coca-Cola Cake recipe: http://mealplanningwithconnie.blogspot.com/2009/06/its-real-thing-coca-cola-cake.html

Here's a quicker Coca-Cola Brownies recipe that has a nice little touch of Coke flavor. Logan really likes these! 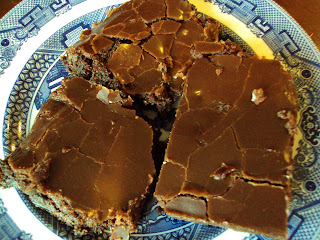 Prepare a package of family-size (for 9x13 pan) according to package directions, substituting Coca-Cola for the water.

When done, remove brownies from oven and pour icing over warm brownies. Allow icing to "set."