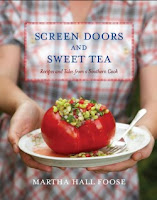 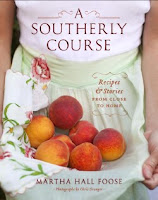 Larry and I attended Off Square Book’s Thacker Mountain Radio production last week, where Martha Hall Foose read from her new cookbook, A Southerly Course. Martha’s first cookbook, Screen Doors & Sweet Tea, garnered her a James Beard Award! Both books are delightful reads, as Martha includes tales about her family and our beloved state of Mississippi, along with, of course, great recipes and gorgeous photos. If you haven’t obtained copies of Martha’s cookbooks yet, I highly recommend you do so. Autographed copies are available at Square/Off Square Books in Oxford. For those of you familiar with our area, Martha, a French culinary school trained pastry chef, opened the Bottle Tree Bakery in Oxford and the Mockingbird Bakery in Greenwood. Martha's other credentials include being a former executive chef of the Greenwood Viking Cooking School and serving as the food stylist for the movie The Help, which is based on the novel of the same name. Congratualtions to Martha! We Mississippians love to see one of our own do well! 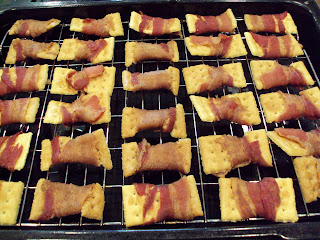 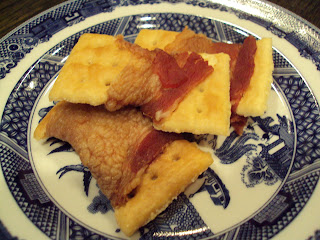 Bet you can't eat just one!
I made these for Sunday school this past Sunday. We decided that this recipe is a keeper! According to my calculations, each Bacon Crisp contains 2 grams of fat.
Be sure you have friends to share these with! They're addictive!
Along with the original recipe idea, I've included a couple of variations of the recipe I found!
Enjoy!

Bacon Crisps (or Bacon Crackers - whichever name you like best!)
1 sleeve Club Crackers
1 pound thin sliced bacon
Preheat the oven to 250 degrees.
Cut each slice of bacon crosswise into three pieces
Wrap each cracker tightly with a strip of bacon.
Place the wrapped crackers on a broiler rack on a baking sheet.
Place baking sheet in the oven and bake for 1½  hours, or until the bacon is done.  (No need to turn.)
Serve hot or at room temperature.
Note: You can also bake at 350 degrees for 40 minutes, if you're in a hurry!
Variation One: Prepare crackers as directed above and sprinkle with brown sugar after placing on baking rack. Bake as directed.
Variation Two: Spoon a teaspoon of Parmesan cheese onto each cracker before wrapping with bacon. Proceed as directed.
Posted by Connie on Wednesday, April 20, 2011