My blogging buddy, Mub, asked about substituting butter for the shortening in my Square Biscuits recipe from Tuesday. Mub hails from “up North” and now lives way over in the Netherlands. So, bless her heart, I am sure she has no idea how much controversy this innocent question can spark amongst a group of Southern cooks!

You may ask, is there really a big difference in using one fat over the over? In a word, yes. It is all about texture versus flavor.

Shortening = tender, crisp and dense biscuits
Butter = flaky, flavorful and light biscuits
What accounts for the difference in texture? Water!
Butter is about 17% water. Shortening contains no water.
So, what did a little water ever hurt?
The more water there is in dough, the more active gluten created. The more gluten present in dough, the tougher the dough.
Again, it is really a trade off:
Butter = Flavor
Shortening = Tenderness
There are generally four camps in the Butter vs. Shortening in Biscuits Debate:
Camp One: These folks wouldn’t dream of getting butter anywhere near their biscuit dough. They love the tender texture that shortening provides. Most will concede to brushing a little melted butter over their biscuits after baking.
Camp Two: This group is all about flavor! They’ll take that unbeatable buttery flavor over texture any day of the week!
Camp Three: These folks are the peacemakers. They’ll use half butter and half shortening in their dough, trying to have the best of both worlds. Alternatively, they will use butter flavored shortening, again looking for that perfect compromise.
Camp Four: These folks use butter or shortening depending on their mood. As I never met a biscuit I didn’t like, I fall into this camp!
Here’s my simple recipe for Buttery Biscuits: 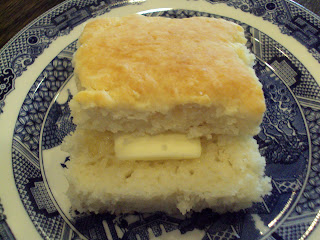 Buttery Biscuits
Buttery Biscuits
You can play around with the amount of butter in this recipe, which calls for a whole stick. You can reduce it by half and still have a decent biscuit.
2 cups self-rising flour
½ cup butter, cut into thin cubes
¾ cup buttermilk, milk, cream or half and half
melted butter
Preheat oven to 450 degrees. Lightly coat a baking sheet with cooking spray.
Measure flour into bowl.
Cut butter into flour until it resembles coarse crumbs.
Make a well in the center of dry mixture and add milk all at once.
Using a fork, stir just until moistened.
Turn the dough out onto a lightly floured surface.
Knead the dough by gently folding and pressing dough for 4 -5 strokes or until dough is nearly smooth.
Pat or roll dough to 1/2 -inch thickness.
*Cut dough with a floured 2 1/2 inch biscuit cutter, dipping the cutter into flour between cuts.
Place biscuits on prepared baking sheet.
Bake for 10-12 minutes or until golden brown.
Remove from oven and brush with melted butter.
*Or, cut into squares.