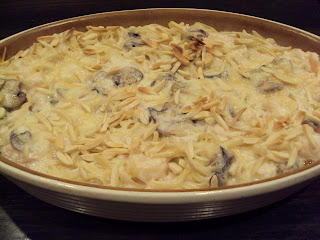 Shrimp Fettuccine Casserole
This was really good - a big hit with everyone!
Logan said it was as good as a dish from Macaroni Grill!
I’ll definitely make it again!
This made just about the right amount for the four of us. The guys did have seconds.
You'll want to double it for a larger group and bake it in a 9x13-inch dish. 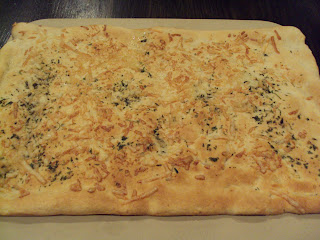 I had picked up a package of ciabatta rolls today to go with the casserole, but when I opened the bag tonight, they were molded. Don't you just hate it when that happens?! Of course I didn't discover the problem until I was ready to bake them. I grabbed a can of pizza dough from the fridge, whisked together a bit of olive oil, a couple of crushed garlic cloves and some dried parsley. I slathered this over the dough, which I had pressed onto a cookie sheet. I sprinkled the whole thing down with a handful of Asiago and Parmesan cheese. Presto - quick and easy focaccia bread!
Shrimp Fettuccine Casserole
1 (8-ounce) package fettuccine
4 tablespoons butter
4 tablespoons flour
1 cup chicken broth
1 cup milk, cream or half-and-half
1 cup grated Swiss cheese
salt, white pepper and Cajun seasoning, to taste
2 cups sliced mushrooms, sauteed (You could use canned.)
1 pound shrimp, peeled and cooked (I used the frozen, fully cooked kind in a bag. I just barely let them thaw, since they were going to be baked. Shrimp gets really tough when it's over cooked. Letting the shrimp just thaw worked perfectly! The shrimp were really tender and juicy!)
1/2 cup Parmesan or Asiago cheese
1/2 cup slivered almonds

Preheat oven to 350 degrees. Coat a 2-quart baking dish with cooking spray.
Cook noodles and drain.
While noodles are cooking, melt butter in a sauce pan. Whisk in flour and cook for 2 minutes. Blend in broth and cream. Cook over low heat until thickened, stirring constantly.
Add cheese, salt, pepper and Cajun seasoning. Heat and stir until cheese is melted.
Add mushrooms and remove sauce from heat.
Add shrimp to sauce. Then add noodles. Toss gently until noodles are coated with sauce.
Spoon mixture into prepared dish.
Sprinkle with Asiago and/or Parmesan cheese and slivered almonds.
Bake until hot and bubbly, about 15 minutes.
Broil for a few minutes to brown.