These are yummy and rich - almost fudge-like.  These can be cut into very small squares, making these a great choice for large gatherings or to share. This is a Southern Living recipe that I've made easier by using the brownie mix. I use Betty Crocker's Triple Chunk Brownie Mix.
My kids LOVE these! 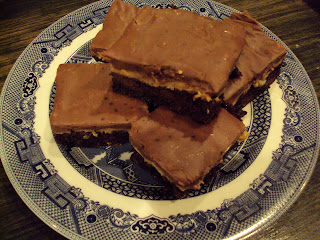 Dump both boxes of brownie mix into a large bowl.  Double the ingredients called for on the back on one box and mix according to package directions. Pour into prepared jelly roll pan and bake for about 15 to 20 minutes.
OR - make brownies from scratch -

Cook 1 cup butter and 1/3 cup cocoa in a saucepan over low heat until butter melts, stirring often.
Remove from heat, and cool slightly.
Combine sugar, flour, and salt in a large mixing bowl.
Add chocolate mixture, and beat at medium speed with an electric mixer until blended.
Add eggs and vanilla, beating until blended.
Spread mixture into prepared jellyroll pan.
Bake for about 20 minutes.

Spoon peanut butter into a microwave-safe dish.  Microwave for 1 minute on high.  Stir and until smooth and spread over warm brownies.