Okay, this was a big hit with everyone!  I will definitely make it again! To lighten it up, I used 8 pieces of pre-cooked bacon that I patted with a paper towel to remove as much fat as possible after zapping it in the microwave. I used fat-free half-and-half to replace the milk.  I used 3 tablespoons of fat-free liquid butter and 2% cheese. I used the green onions as a garnish instead of adding them to the soup since these aren't a favorite of the kids.  Again, a big thumbs up from all!
We still had some of the homemade pita chips left from last night, so we ate those with the soup instead of the corn muffins I had planned. 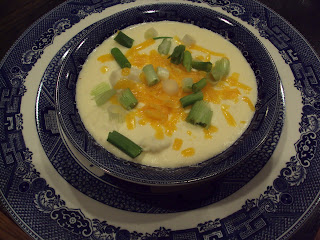 I found this recipe HERE!

Just before serving add and heat through: potatoes and bacon.
Serve w/a dollop of sour cream and a bit of cheese.

Email ThisBlogThis!Share to TwitterShare to FacebookShare to Pinterest
Labels: Soups