We all really liked our supper tonight!
It was simple and quick, fairly inexpensive and healthy, and pretty tasty!! A winning combination around here!! 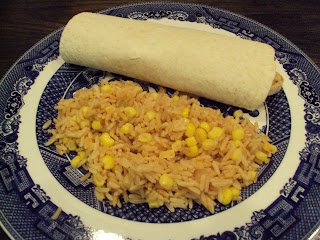 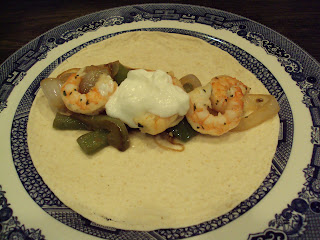 Meanwhile, wrap tortillas in foil and place in oven that has been preheated to 250 degrees.

Heat oil in a wide nonstick frying pan over medium-high heat. A cast iron Dutch oven works great for this!

Add peppers and onion. Cook, stirring occasionally, until limp (about 10 minutes). Remove vegetables and keep warm in the oven where the tortillas are heating.

Add shrimp mixture to pan, increase heat to high, and cook, stirring often, until shrimp are done, usually about 3 - 5 minutes depending on the size of the shrimp. Return vegetables to pan with shrimp. Mix well.

Spoon shrimp mixture into tortillas, top with sour cream, and roll up.

Email ThisBlogThis!Share to TwitterShare to FacebookShare to Pinterest
Labels: Fish/Seafood