Pecans are my favorite nuts! They are a member of the hickory family. Hickory trees are native to North America, growing easily in most areas. The wood is extremely strong and is a very versatile building material.

Of course, it's the hickory's nuts that are this tree's great claim to fame. These edible delicacies of nature have a long history of use here in the South. American naturalist, William Bartram, documented in 1773 that he saw 100 bushels of hickory nuts that were stored at just a single Creek Indian family home in Georgia. Since pecans are a variety of hickory nut, it's entirely possible that what he saw was pecans.

Speaking of the Creek Indians, I have heard this phase all my life and assumed it referred to a body of water.

Around here most folks say, "Lord willing and the..."

The other day I heard that the "Creek" in this phrase refers to the American Indian tribe, not a tributary of water.

Here's what I uncovered on the web. Info from Knol:

The first time this phrase was known to be in print it was written by a man named Benjamin Hawkins in the late 18th century. Hawkins was a politician in the late 18th century and early 19th century as well as an Indian diplomat. This was back in the day where American Indians and the white settlers were constantly fighting for the land in the United States. While in the South, Hawkins was requested by the President of the United States to return to Washington. In his response, he was said to write, “God willing and the Creek don’t rise.”
Benjamin Hawkins capitalized the work “Creek”. Therefore, it is deduced that what he was referring to was not a body of water at all, but instead was the Creek Indian tribe. The Creek Indians were also known as the Muscogee tribe which were located in the southeastern region of the United States (Florida, Georgia, Alabama, and Oklahoma). Since the Creek Indians were prevalent in the area where he was located, Hawkins knew that there was a great risk of the Creek Indians attacking.

My quick check of the web also showed there is some debate about the phrase's etymology, but I found the Creek Indian theory interesting. We are very proud of our Native American heritage here in Pontotoc. Our very name is derived from a Chickasaw word meaning, "Land of the Hanging Grapes."

What does this have to do with food? Well, I heard this tale over the speakers at the Piggly Wiggly, while shopping for groceries. That's the only tie in for this rabbit chase!

Since we talking about debates, there is another long-standing controversy as to the proper pronunciation of "Pecan." Each side vehemently defends their voicing of the word as correct.
In Mississippi, most of us pronounce this word as pi-kahn. Nothing announces that "you're not from around here," more than ordering a piece of pee-kan pie. But, bless your heart, we'll serve it to you anyway!
Many blessings and happy cookin' ~ Connie 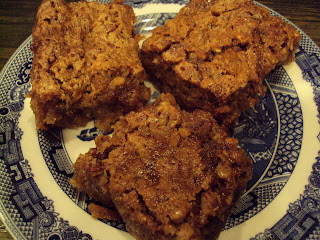 Pecan Pie Cake
I made this over the weekend. Everyone here liked it pretty well. Larry took some to work , and he said they all liked it, too!

Mix cake mix, 1 egg, and melted butter until well blended; reserve 2/3 cup of this batter. Spread the rest of the batter into a 9 x 13-inch pan coated with cooking spray.

Bake for about 15 minutes, or until lightly browned.

While crust is baking, mix the reserved 2/3 cup batter with the other filling ingredients. Pour filling on top of crust and cook about 50 to 60 minutes at 325 degrees.
Posted by Connie on Wednesday, September 02, 2009