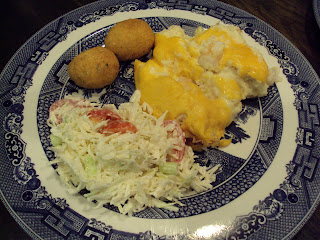 Shrimp and Grits Casserole, Quick Caesar Coleslaw, and Hush Puppies
Larry and I were the only two who ate this tonight, but we both like the casserole and the slaw.

I lightened the casserole a bit by sauteing the onions and garlic with butter-flavored cooking spray instead of the butter. I used 2 tablespoons of whipped cream cheese instead of the 3 oz. package called for in the recipe. The three ounce package had 30 grams of fat - no wonder it's so good!! The whipped had about 12, so around half the amount of fat. I used 2% cheddar cheese for the topping, too. It was still very good! I will definitely make both of these again! This is a great way to stretch the shrimp! I used a bag of frozen, fully cooked shrimp. This meal is quick, too! It can be on the table in 45 minutes. Although I really like the green onions and minced garlic, for a quicker version, you could substitute a bit of onion and garlic powder. 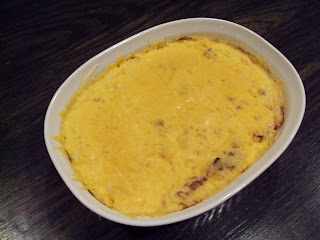 Saute onions in butter until soft; add garlic and saute a minute longer. Set aside.

Combine milk and broth in a medium heavy saucepan; bring to a boil. Gradually add grits and salt to pan, stirring constantly with a whisk. Cook 5 minutes or until thick. Remove from heat.

Bake for 25 minutes or until set. Serve with hot pepper sauce, if desired.

I baked frozen some of the frozen hush puppies from Wal-mart. The bag just says Hush Puppies. On the back it says they are distributed by Wal-mart.

Email ThisBlogThis!Share to TwitterShare to FacebookShare to Pinterest
Labels: Fish/Seafood