Brother Ken started a new sermon series yesterday on waiting for God. I know I will personally benefit greatly from these sermons, since I hate waiting. Larry, on-the-other-hand, is a great waiter. I often accuse him of being patient to a fault! The difference in the way each of us choose to do things, based on this ability to wait, shows up in all situations of life - including the way we prepare food.

Larry usually cooks for our Sunday school class a few times each year. Yesterday was one of those times. He decided to cook pork tenderloin and biscuits. After some serious consultation with "seasoned pork tenderloin grillers," Terry, Julie and Mark, Larry had his recipe, which included Lawry's Season Salt. Y'all know, Larry was elated when they told him to put some Lawry's up on that tenderloin!!! As I've shared before, Larry loves the Lawry's!!

Now that he had his recipe and instructions, Larry then had to decide how to cook the meat. Grilling generally takes about 30 to 45 minutes. Smoking takes from about an hour and a half to two hours. Me? - I'm heating that grill, Baby! Not Larry! He's up two hours early on a Sunday morning gettin' that smoker goin'!

Both, grilled and smoked, are delicious! We all loved Larry's smoked version and found it very moist and tasty!! His patience paid off, and we all benefited!! Thank you, Larry!! 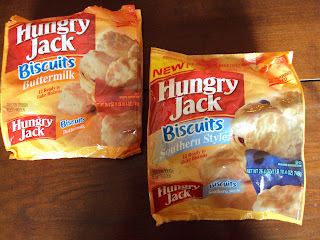 
Piggly Wiggly had Hungry Jack's new frozen biscuits. We decided to give them a try! We thought they were slightly different from Mary B's and Pillsbury. Very good!! There are two versions: Southern Style and Buttermilk. 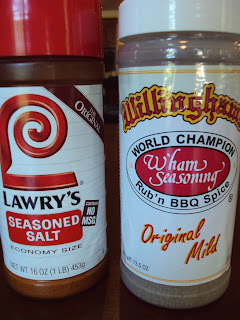 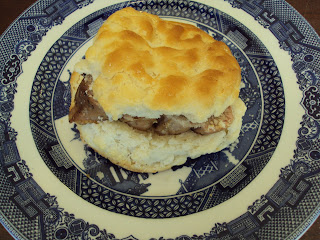 Preheat grill or oven to about 350 degrees. If smoking, prepare smoker according to manufacturer's directions.

Remove from heat; wrap in foil and allow to sit for about 30 minutes before slicing!
Posted by Connie on Monday, August 03, 2009