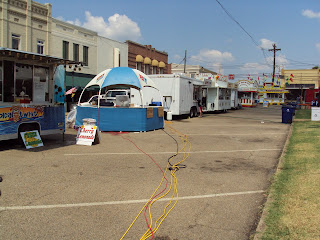 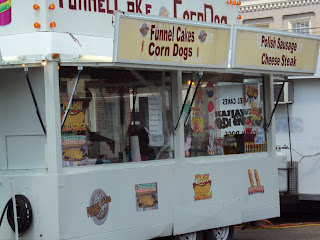 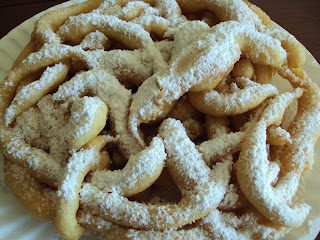 Fried pancake-like batter channeled into a vat of hot oil, deep fried and sprinkled with confectioner's sugar -
commonly known around these parts as a Funnel Cake

Many thanks to Wayne Carter for great meals the last two Saturdays. Last Saturday, I ate some of Wayne and Barbara's delicious cooking, and tonight Larry and I enjoyed preparing one of Wayne's favorite suppers that he so graciously provided the recipes for!
Our town’s annual gala is the Bodock Festival. In case you're wondering about the festival’s name, it hails from a tree, more officially know as a bois d’arc. You can visit Dictionary.com for a definition, description and auditory pronunciation. I’m assuming it’s of French origin, and that the name was probably given during the years of the South's early exploration. Of course, over the years we’ve managed to corrupt its pronunciation by leaving out a sound or two. To borrow, and slightly amend, a phrase fellow Mississippian Jimmy Buffet coined, “we can't pronounce our r's or g's when we’re speakin' Southernese.” So, we call these trees, and the large apple-green fruit they produce, Bodocks. Another slang name for the inedible fruit is Horse Apple.

When the festival began, Pontotoc boasted the oldest, and I’m thinking largest, Bodock tree in the state, providing the perfect name for our festival. Unfortunately, in 2001 a tornado destroyed this historic tree, and for the past several years, we've been without our festival's claim to fame. It was with much relief, and probabaly a good deal of searching on our city’s part, that Pontotoc was once again crowned Bodock Tree State Champ a few weeks ago - and just in time for the festival! Thankfully, another bodock tree in our great city was located that re-took the title and brought the distinction back home where it belongs!

One of the most distinguishing factors of our festival is the heat. We’ve even dubbed a little phrase around here to let folks know just how hot any day is by declaring it “Bodock hot.” But the heat has truly become as much a part of the festival as the kiddie rides, the Bodock Post Throwing Competition, the courthouse step singing, the 5K run and the vendors selling their vast variety of wares. Among the sellers, of course, are the food booths, where you can get anything from a corn dog to chicken-on-a-stick. M.C.’s favorite is the funnel cakes, and Logan is big on the Cherry Lemonade. 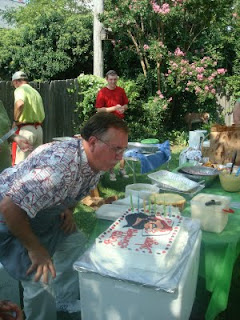 This year we had the pleasure of attending a Bodock Party/Birthday Bash at Felecia’s house, which is located right in the middle of all the festival action and is a perfect place for a Bodock Get-together! We are very grateful to Wayne and Barbara for extending an invitation to our family. Unfortunately, Larry had to work, but the kids and I had a blast! I’ll just say those folks know how to throw a good ole summertime Southern fish fry. They served fried catfish, homemade hush puppies, French fries, cheese grits, Mardi Gras coleslaw, cheesecake and an Elvis birthday cake, in honor of Wayne’s birthday. Wayne has had to share his birthday with the anniversary of The King’s death since 1977, thus the commemorative Elvis cake! I love it!

We all heaped our plates full of these wonderful dishes, sat and rocked in Felecia’s vintage blue-green lawn chairs, and listened to Wayne and Barbara’s son, Jason, and his band sing and play the Blues, a soulful style of music born in the Mississippi Delta. Now, y’all, you know it just don’t get much better or much more Southern than that!

Before going down to Felecia’s, we had had the pleasure of listening to Wayne and Barbara’s daughter, Rayanne, and their granddaughter, Anna, sing on the courthouse steps. I have always been very fond of Rayanne. She and Leigh Ann were friends throughout their growing up years. It's hard to believe she was younger than M.C. when I first met her!

Rayanne and Anna are part of a newly-formed contemporary Christian band, Still Time. The band did a great job, and it was so nice to see a mother and daughter being able to praise the Lord and have fun together doing it! Best wishes to this band! I know the Lord will bless and use them!

If any of y’all are in our neck of the woods the third week-end in August of any year, be sure to drop by the Pontotoc Bodock Festival! A good time awaits all!!

Addendum: Many thanks to Wayne for this link to an article he wrote on his and a couple of his friends' site, The Bodock Post. As you will read, Wayne knows much more about the Bodock than the average Pontotocian! Thanks for sharing this article, Wayne! I am always excited to learn something new!

http://rrnews.org/bp/tbp001.htm (For info on the Bodock tree, you can scroll past the introductory part, but I found the introduction, which includes the origins of the name of their site, very interesting.)
Posted by Connie on Saturday, August 22, 2009

Email ThisBlogThis!Share to TwitterShare to FacebookShare to Pinterest
Labels: Ramblings