Be not forgetful to entertain strangers:

for thereby some have entertained angels unawares.
Hebrews 13:2

The other day, Larry, Dude, the kids and I took Aunt Jean to Memphis for an appointment. Because the waiting room can sometimes be busy and crowded, Larry took Aunt Jean inside, while the rest of us found a nice, shady parking space and waited in the van.

While we waited, the kids read and filled their ears with i-pod music. Dude worked a Sudoku puzzle, and I immersed myself in the new Pontotoc First United Methodist Church cookbook, which Aunt Jean had gifted me with earlier that morning. When my peripheral vision caught sight of a bit of movement, I turned to see a couple passing near the car. Because dozens of patients and medical personnel had been coming and going past us all morning, I turned back to my cookbook thinking these two were simply passing by, as well. A moment or two later, Logan said, “Momma, I think that lady is trying to get your attention.” I turned again to look out my window. Now, I’m not the sharpest knife in the drawer, so it sometimes takes me longer than most to get the full grasp of a situation. However, this time I knew immediately what they wanted. Money. I just hate that about larger cities. If you go anywhere bigger than Tupelo, chances are, you’re going to have someone on the street ask you for money. I do try to get food for anyone who is hungry, but I almost never give cash to strangers.

The truth is, I am usually frightened by those who are “panhandling.” However, the two who were presently standing beside our van looked far from threatening. It was an older, blind man, who was accompanied by, what appeared to be, his pie-faced daughter. I reluctantly lowered my window. The young lady said they were in town for a doctor’s appointment, were hungry and needed some money for lunch. In her hand, she clutched a plastic bag, which clearly held sodas and vending machine fare. As she saw me glance at it, she said someone had given them this food, but because she had lost all her teeth, she couldn’t chew potato chips.

Truth be told, I was glad that my wallet was empty. (Does any mom, with two teenagers, ever have cash for longer than an hour after she’s been to the ATM?) I was just about to tell her, with absolute honesty, that I had no money with me. As I began to open my mouth to form the words, my eyes fell upon a $10 bill that Larry had stuck above the visor that morning after getting gas. Now, I had a decision to make. I hesitated a moment, said a silent prayer, reached over my head for the cash and handed it to them. They “thanked me kindly” and asked if I knew where they might could get some lunch. I advised them to check with someone inside the building. We watched as they walked across the street, where they stopped a couple of business-looking men in suits. From our vantage point, we clearly saw the men reach into their pockets, remove their wallets, and pony-up money, just as I had. I turned to Dude and said that I guess I’d been “had.” In an attempt to “help my feelings,” he agreed that the situation had been “too close to call.”

I was still feeling like the country bumpkin that I am, when a short time later, the couple walked back past our van, and tipped their heads towards us as they held up a Styrofoam plate, presumably filled with food. Had we been “had” after all? I honestly don’t know. Were we and the gentlemen across the street the first people these folks had ever asked for money? Probably not. Did we perhaps entertain angels unawares? We’ll never know this side of heaven. Did my kids see their mother, in a difficult situation, make the choice to choose compassion and to show the love of Christ, rather than give into her pride and cynicism? I like to think so.

Give to the one who asks you, and do not turn away from
the one who wants to borrow from you.
Matthew 5:42
Let me tell you about the new cookbook that had my attention that morning! Nourishing Body and Soul is being used to raise funds for the First Methodist Building Program. It is packed full with wonderful recipes! Yesterday, I used a couple to prepare a casual brunch for my friends, Christine and Anne T., and Susan and Erin B. We got together to make wedding favors for Susan's daughter Rebecca's upcoming wedding. We had fun visiting and making the favors. They said they really enjoyed the food, and I had fun cooking the new recipes.

I had made the Breakfast Casserole for our Sunday School Class this past Sunday. They all really liked it, too!

You can get a copy of the cookbook by dropping by the church's office. Their hours are 8am - 5pm. They are closed from 12 - 1 for lunch. The office will also be closed all of next week for vacation. Some church members and local businesses also have copies of the cookbook for sale. Be sure to get one! We will be giving one of these cookbooks away in July on this blog!! 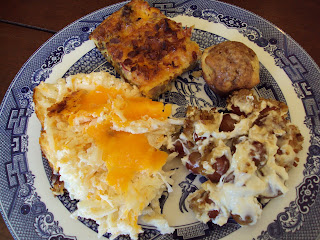 Spray a 9x13 baking dish with cooking spray. Line with crescent rolls, pressing seams together to seal. Sprinkle crust with sausage, ham, and cheese. Beat together eggs, milk, salt and pepper. Pour egg mixture over sausage, ham and cheese. Top with bacon. Bake for 30 minutes, or until set. Let stand for about 5 minutes before serving.

I developed this recipe through trial and error. We really like this combination of ingredients.

Preheat oven to 350 degrees.
In a large sauce pan, melt butter. Add grated onion, and saute until onion is translucent. Add cream cheese to pan, and stir until smooth. Add sour cream and mayonnaise. Stir until smooth and well-combined. Mix sauce with hash browns. Add 2 cups of the cheddar cheese. Pour hash browns into a sprayed baking dish. Cover with foil. Bake for about an hour. Remove foil, and sprinkle with remaining cheese. Return to oven long enough to melt cheese.
Posted by Connie on Wednesday, July 01, 2009