Penne Pasta with Spinach and Bacon, Best Ever Green Beans and Garlic Bread 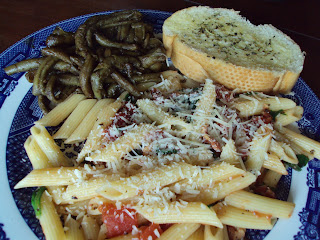 Penne Pasta with Spinach and Bacon, Best Green Beans Ever and Garlic Bread


Last night was the first time I had made this pasta. Larry and I both really liked it. I will definitely make it again. While it has enough bacon in it to make it meaty, I do think chopped grilled chicken would be good added to this dish. Or, you could use the pasta as a side dish to accompany grilled chicken breasts.

The kids aren't crazy about tomatoes, so I pulled some plain pasta from the pot before adding the spinach, drizzled it with just a bit of olive oil, and stirred in some Italian seasonings and Parmesan cheese for them.

Nancy was so generous with her green beans, we still had a few left. Last night I added some Best Ever Green Beans to our meal. Larry and I both love these. The onions, garlic and broth give the beans a nice, savory flavor.


This recipe is very versatile. If you like crisp-tender, "Yankee-style" green beans, cook your beans only until desired tenderness is reached. If you're like us and prefer to "cook your green beans to death," you can let them simmer as long as you like. I cooked mine in my cast iron Dutch oven, giving them a caramel coloring. A regular boiler will produce a brighter, greener bean.

You can also use this recipe with canned green beans.

Penne Pasta with Spinach and Bacon and Garlic Bread

Bring a large pot of lightly salted water to a boil. Add the penne pasta, and cook according to package directions. Add spinach during last two minutes.

Meanwhile, heat 1 tablespoon of olive oil in a skillet over medium heat. Place bacon in the skillet, and cook until browned and crisp. Add garlic, and cook for about 1 minute. Stir in the tomatoes, and cook until heated through.

Drain the pasta and spinach. Toss with the remaining olive oil, and the bacon and tomato mixture. Plate, and sprinkle with Parmesan cheese.

We like the Lite New York Texas Toast All You magazine often has coupons for this. If you are a coupon user, the coupons in All You will more than pay for the magazine!

Melt butter in pan with green onions. Cook until onions become translucent. Add green beans and garlic, sauteing until butter is gone. To the same pan, add the broth. Cook on med-high heat until green beans reach desired tenderness. All liquid should be evaporated.