TripAdvisors’ number one Destin restaurant pick is McGuire’s. When we asked a couple of Destin locals for restaurant recommendations, they also highly recommended McGuire’s - especially their burgers! The steak house restaurant and gift shop has been featured on the Today Show, and also has a Pensacola location. The atmosphere is similar to our local Harvey's, or any of the chain restaurants with a bar area, just with a strong Irish theme. We went for an early lunch. It was quiet, and we had no wait. A novelty, at least to us, was the thousands of patron-autographed one dollar bills that hung from the ceiling and were taped to every imaginable surface in the restaurant.

McGuire’s offers a wide variety of burger choices. Larry and I both ate the Bacon Cheese burger. M.C. ate the Blue Cheese Burger, and Logan got the Swiss burger. All were very good, but the favorite thing on my plate was the homemade potato wedges. They were sooo good! I left half my burger, just so I could eat all my potatoes!

The restaurant serves a version of Senate Bean Soup. It costs $0.18 with a meal. The menu “warns/teases” that the cost is $18, if the soup is all you order. It is suppose to be the same recipe used in the Senate cafeteria in Washington. McGuire’s boasts that their Bean Soup still only costs $0.18, while a bowl in D.C. will now set you back $2.49! You just can’t beat private enterprise!

We figured at eighteen cents a head, we didn’t have much to lose, and all order a bowl, except M.C. When our soup arrived a few minutes later, I had M.C. try mine, as I’ve always had them try at least one bite of something that they think they won’t like. Many times, they find that they do like it after all. So it was with the Senate Bean Soup! We had our waitress to bring M.C. her own serving, and we all cleaned our bowls. They served it with a delicious loaf of dark brown bread topped with honey butter. While this bread was delicious, we all couldn’t help but wish for some good ol' cornbread muffins to accompany our soup!

I made Senate Bean Soup tonight, and we all thought mine was just about as good as McGuire’s. When I searched the web for the recipe, I found about a million different versions! I took several of the recipes and came up with the recipe below. Later, as I thumbed through the current edition of Taste of the South, I stumbled across an article on Destin restaurants in the magazine. One of the featured restaurants was McGuire’s. The restaurant had agreed to share their soup recipe with the magazine’s readers. Isn’t it a small world?! 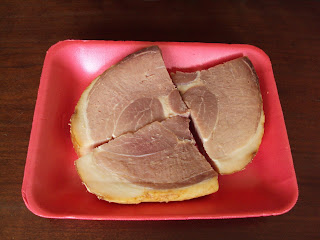 $2 worth of hamhocks from The Pig (Piggly Wiggly) 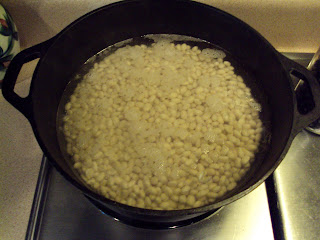 I cooked mine in my cast iron Dutch oven that Larry gave me last Christmas.
I love this pan!! No Southern kitchen should be without one! 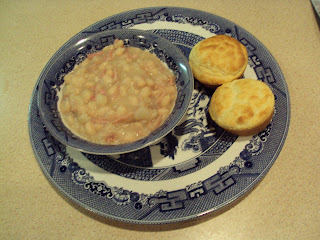 1 ham bone with meat, 2 smoked ham hocks, or a couple of thick slices leftover spiral ham, cut into small pieces (not country ham, it is too salty)

1 large potato, cooked with 2 - 3 garlic cloves and mashed (Reserve a bit of the potato water for sautéing chopped onion and celery.)


I tried to come up with a quicker, easier-to-make recipe. Paula Deen’s version used instant potatoes, but still called for dried beans. I’m thinking you can use canned beans. This should taste pretty good for the time and effort involved. Let me know if you try it.


Bean Soup is served in the Senate’s restaurant everyday. Read more about its history here:

One of the joys of eating at home is cooking your bread of choice. I made us some cornbread muffins!! We were right! The soup was much better with the cornbread - or maybe it's just our Southern palates!

Mix together sour cream, milk and egg. Add melted butter and mix well. Add dry ingredients, blend until moist and smooth. Spoon into muffin cups. Bake for about 15 minutes, or until golden brown.