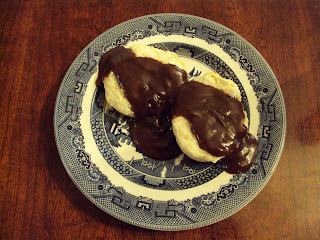 There are two types of us “fortunate-enough-to-be-born-and-raised-Southerners” - those of us who were blessed to grow up eating chocolate gravy and biscuits, and those poor soul who weren’t so lucky!

I was an adult before I knew there were people who grew up down here without knowing the pleasure of this delicacy. It was my mother-in-law who broke the news to me. I said something one day about eating chocolate gravy and biscuits. Almost sheepishly, she confessed to only recently having learned of this breakfast treat, when Leigh Ann came home baffled, from having had breakfast at her friend Penny’s house, and wanting to know why she’d never had been served chocolate gravy and biscuits before!

Now, unfortunately, my husband’s family is by far not the only ones to come late to this dish. I’ve made an unofficial study of it since the day I learned chocolate gravy isn’t universally served to every child born south of the Mason-Dixon Line. I have decided there is no malice intended towards those deprived of this indulgence. Like my dear, sweet mother-in-law, some mommas just don’t know about it!

Let me say, I have been on a twenty-plus years’ crusade to rectify the situation. Score one point for me this morning! When M.C. and her friends awoke from their sleepover, I asked who wanted chocolate gravy and biscuits for breakfast. Eyes began to sparkle, and mouths started to water amongst those who knew what treat lay in store! There was only one child who hadn’t had chocolate gravy before, but we fixed that! One time, after I had served this to a couple of men who were doing some work at the house, one of their wives called me and asked, “What in the world is chocolate gravy, and how do I make it?” She said it was all her husband had talked about since he had gotten home that night! Bless their hearts, I do believe they had some Yankee roots, but kudos to them for doing their part to assimilate into the Southern culture by learning more about our delicious regional cuisine.

In my “study”, I have also uncovered a bit of disharmony other than the one that exists between the chocolate-gravy-eaters and the non-chocolate-gravy-eaters. It seems there are two camps amongst the gravy connoisseurs themselves - those who make chocolate gravy with milk, and those who make it with water. The milk version is creamier, and the water version is “syrup-ier”. Just like my momma, I pitch my tent with the water users, but I “a'int gonna get mad at cha” if you prefer using milk.

Here’s the recipe I use. It’s really good!

Mix all the dry ingredients in a pan until cocoa and flour are well blended. Add milk, and cook over medium heat, stirring constantly, until mixture thickens. Add butter, and stir until melted. Remove from heat, and add vanilla.

Serve over hot biscuits. Yes, frozen ones work! (My momma would be so ashamed!)

Note: I don't usually "butter" my biscuits since my recipe includes butter in its ingredients, but one of our morning guests said "her momma always put a pat of butter on each side of her biscuit before putting the chocolate gravy on it." I'm not going to fool with any momma's tradition! If you want a pat or two of butter on your biscuit - go for it!
Posted by Connie on Thursday, June 25, 2009